Politicians applaud our Veterans during election cycles.  Restaurants offer special deals for a day in November and we thank them for their service as casually as somebody holding open a door. But how many of us really know how the veterans in our lives spent their time in the service, or when they did it?

A group of sailors from the USS Clark FFG-11 gathers annually in Wilmington to catch up, trade a few jabs and share some memories. A quiet celebration of service. Their ages may vary, but all share a bond rarely understood by civilians. Despite those ties, many don’t know much about their shipmates’ experiences.

The group ironically reunites at the home of one of our crew who never really enjoyed his stint in the Navy twenty-five years ago. Familiar faces age, yet somehow remain the same. Conversations change to college tours, grandchildren and second careers. Men from different eras of the ship’s service meet for the first time, but common experience and camaraderie build new friendships. Memories of heroic acts grow taller than Paul Bunyan and comedic incidents bring heartier laughs each year, still the punchlines remain the same. Then there’s the annual group picture in front of the boulder on the front lawn. If you’re not in it, “you missed ship’s movement”, which is worse than an Army guy going AWOL. For activities, they’ll hit a minor league baseball game or take a small boat to the edge of the Delaware, the river that once afforded them access to the Atlantic Ocean and beyond.

This year the group changes course. After muster at the rock, we board a bus en route to the Philadelphia Navy Shipyard (PNSY), and stories flow like the beer in the coolers at our feet until the crew arrives at our old homeport. Today, it's where the Navy puts its ships out to pasture. Abandoned hulls haunt the still waters of the back basin. Masts stand at attention, but no red, white or blue flaps in the wind above the empty decks.

“The Klackring!,” a crewmember points. “That was my last ship.”  Heads turn.
The crew poses for an emotional picture in front of four grey frigates, more like peaceful ghosts, as somber silence settles on the crumbling pier. Above the rusty anchors, large white hull numbers have faded like the hair on the men who once gave life to the ship. This brief stop sets the tone for what will happen to Chief Dennis Tompkins and the rest of our shipmates.
Tompkins retired just after the turn of the century. Thirty-six years before that, Tompkins volunteered for that Navy boot camp because in those days, if you were from Brooklyn, it was tradition.

“Your grandfather, your father served. Your family expected you to serve. It was a sacred thing.”  Tompkins said.
The Navy flew the young recruit from New York to Chicago late one night to catch a cold bus to Great Lakes, Illinois. He and his fellow enlistees arrived looking for sleep, only to be greeted by a screaming drill sergeant with a Southern accent. Attempting to obey unintelligible orders, they failed by design. The old salt’s still remembers the drill sergeants warning - to protect his money under his pillow. Eight weeks later, the young seaman received orders to report to his first ship, the USS Yellowstone.

When our bus leaves the shipyard, we cross the Delaware to visit a much larger ship tied to a Jersey pier. The driver pulls the bus close to the mammoth floating structure, now called a museum. With a cane, Tompkins trails behind his shipmates as they climb two sets of steps to a narrow, metal walkway across the water. Four stories below a quiet river caresses the sides of the ship. Crossing the brow, Tompkins picks up speed,his cane now barely touching the ground. And as he steps on the quarterdeck, the ship’s welcome mat, he looks back at me and points his cane at a faded picture displayed on an A-frame. “When that Captain came aboard this old girl, I dinged him on!” You can hear the adrenalin in his voice.

When a senior ranking official boards the ship, tradition is to ring a number of bells to let the crew know who is coming on board. The same honor is afforded upon departure. The large framed photograph showed the recommissioning ceremony for the New Jersey in 1968. BMC Tompkins stood watch and rang the bells on that quarterdeck nearly fifty years ago. He was a 3rd Class Boatswain Mate at the PNSY, where we just honored the retired frigates.

We enjoy hot dogs and hamburgers outside on a wooden deck, high up, but Tompkins doesn’t eat. He walks from side to side, checking valves and navigating ladders like a pro. I ask why he doesn’t need the cane anymore, but he ignores me. He invites us into the massive gun turret that served as the guts of the ship’s famous sixteen inch guns. As I duck my head in the small metal door, I smell the dank odor of diesel on metal that sailors can’t get out of their uniforms and oldtimers can’t forget. The walls of the musty contraption shrink into a maze of steel walk-in closets lined with tubular handrails supported by grated walkways. BMC shows us where he was working when someone pissed on him from above. We chuckle. The bus driver shakes his head.
When Tompkins and the New Jersey sailed out of Philly ‘68, they headed for Vietnam with no land in sight for 60 days.

Approaching their destination, they fired that gun for hours at a time. He said after each shot was fired, a guy pulled back on the empty “ram”. Their team would guide a 2,000 pound shell into place, then drop a 600 pound bag of gunpowder behind it, and ram them into the barrel. Finally, they would secure the weapon in place with a breech.  Picture a combination lock on a safe, without the numbers. Once tight, the breech forced the shell to fire forward, preventing powder from backfiring and certain death in the turret.

One day during watch, they pushed a shell and powder forward to fire, but the breech didn’t lock. Air sucked out of the space and the gun sat silent. The turret could explode.

Tompkins says, “You want to get rid of the shell as soon as you can with all that firepower so close to you.” He pauses. “I can remember the dead silence. Complete dead silence in the room. Deathly quiet.”
He felt a trickle from above. The piss. The physical fear. Tompkins’ boss sent him to a gear locker to find a grinder. Sanding the metal down might help the breech lock tight. As he made his way back to the gun, a fighter jet silently buzzed the ship. Then, a split-second later, a loud explosion rocked his world. Running back to the gun, the young boatswain's mate feared the worst. Happy to find his shipmates alive, one of them wet with fear, the rest with sweat, he realized the plane broke the sound barrier with a sonic boom.

Now, decades later, the same room is quiet again, but not from fear. Tompkins breaks the silence.

“I often think of the massive explosion on the Iowa years later and the guys that died in their turret. It wasn’t a sonic boom that killed them,” he says. He knows their breech didn't lock, and it still haunts him today.

Dusk looms as we tour the rest of the ship. As the only guests on board, we are invited to perform “colors” on the fantail. In other words, they ask us to take down the flag at the back of the ship at sundown. Chief Tompkins seems like a natural. Lining up as formally as we can, our senior officer says, “Attention to colors!”, we all salute. Tompkins lowers the flag reverently. The dark river and the grey skin of the ship contrast with the night sky like a black and white photograph from World War II as three men attend to the flag before it touches the deck.

Back in the Admiral’s quarters, volunteers and veterans toast Tompkins and days gone by. It’s not often they have a guest like him onboard. Tompkins is one of the few “plank holders” of the USS New Jersey, which means he was on board the day they recommissioned her in 1968. We plan one last honor for the Chief.

On the quarterdeck, Tompkins finds us standing at attention in two lines. A volunteer tells him that we are going to “gong” him off, then rings two bells over the loudspeaker. We salute in unison as he walks between us, returning the gesture.
“Chief Boatswain’s Mate Dennis Tompkins, Plank Holder, Departing.”

The last shipmate in line hands him the flag, folded in a blue triangle. Another loud gong echoes and he departs the ship alone.  We got goosebumps.

He’s still older than me, the years between us remain the same. Now I have more years behind me than he did when we met. My hair greys like his. We reconnected a few years ago, when he showed up at a reunion, and he hasn’t missed one since. They mean something to him, and, now, they mean more to me. I never asked him what he did, I just knew that he served.

Later, when I ask him about the night, he says, “I was humbled. I thought about my shipmates. The tribute was to them and to the ship. When I look back, I did it [my service] for myself and for my crew.”
I ask him about Vietnam.

“Nobody talks about the war. It’s usually between Veterans alone,” he whispers.
​
Everyday we walk by guys like Tompkins, and they all have a story, but they don’t go around bragging about it. That’s how Veterans roll. So when you hold the door for an old Vet, don’t just thank them, ask what they did. That’s how to honor their service. 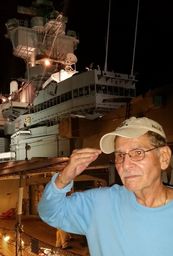